Would you like to receive DawgNation news alerts? Excellent! News alerts will be displayed in your browser.
DawgNation staff reports
Posted 6 years ago

For most high school athletes, recruiting rankings do matter. After all, to call yourself a 4-star or 5-star is an honor when you consider that hundreds of thousands of kids play high school football. A small percentage of those players get ranked.

UGA commit Chad Clay isn’t one that cares for ratings or recruiting services.

Clay, a 3-star cornerback from Peachtree Ridge High School, was not one of the players who saw their status rise in the newly released rankings from recruiting services.

The 6-foot, 180-pounder took to Twitter to let everyone know how he feels about the rankings. 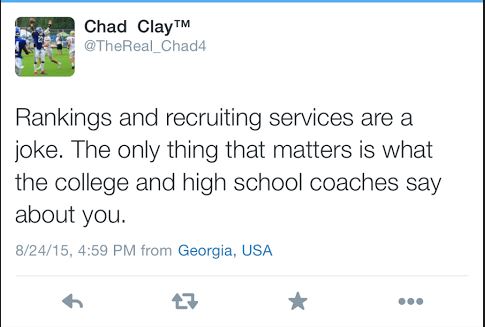 Julian Rochester told the AJC earlier this month that he was frustrated after getting criticized from different analysts.

On Monday, Rochester was dropped from a 5-star to a 4-star.

We have a new way to comment on our DawgNation stories. To do so, you must be a registered user on the DawgNation forum. If you haven’t registered, please go to the Forum homepage on DawgNation and look for “register” on the right side.
Tyre West
Tift County, Class of '22
Tifton, Georgia
DT
6-4, 280 pounds
Committed: