Alabama coach Nick Saban paid tribute to the importance of the Tide’s rivalry game with Tennessee, which his program looks to win for a 15th-straight time at 7 p.m. on Saturday night.

“We’re going to have to play our best football of the season,” said Saban’s whose team is a 25-point favorite over the Vols in a game that highlights the afternoon with limited action with No. 1-ranked Georgia among the five SEC teams that are idle.

Alabama snuffed out the notion that it might be slipping after its 41-38 loss to Texas A&M two weeks ago by dominating Mississippi State on the road last Saturday, 49-9.

Tennessee meanwhile suffered a bitter and heartbreaking 31-26 loss to the villainous Lane Kiffin, who once again left the city of Knoxville in a state of disarray in the middle of the night.

It will be up to new UT coach Josh Heupel to get his team regrouped and focused for a challenging road trip to Tuscaloosa.

Alabama features former Vols’ linebacker Henry To’o To’o, one of the 29 Tennessee players who entered the transfer portal since the end of last season.

The Tide is ranked No. 4 just two weeks after its loss to what was then an unranked Texas A&M team, a sign of the respect the defending national champions continue to demand.

Texas A&M is starting to look like the team everyone expected at the beginning of the season with Zach Calzada rounding into proper form.

“Zach’s first day on campus looks much different than how he looks now,” A&M kicker Seth Small said of his quarterback in the aftermath of the Aggies’ improbable 41-38 upset, per SI.com.

“To see how he’s matured as a person, as a football player, as a leader on this team had been incredible.”

Jimbo Fisher told TexasAgs.com he wants his team to maintain its momentum after it steamrolled Missouri 35-14 last Saturday.

“That same energy, that same juice, that same vigor and that same drive for perfection,” Fisher said.

South Carolina enters the game after a last-minute escape over Vanderbilt.

Coach Shane Beamer said the Gamecocks are building “something special,” but those plans will be put on hold this week.

The Maroon Bulldogs rank 101st in the nation in passes of 20 or more yards and 126th with only six passes of more than 30 yards, and the Northeast Mississippi Daily Journal reported that SEC analyst Greg McElroy is putting that on Mike Leach.

“What I’m seeing right now is stubbornness from Mike Leach,” McElroy said, per the Tupelo newspaper. “He, on several different occasions, allowed maybe the best edge pass-rusher in the country in Will Anderson to be in a one-on-one situation against his right tackle...

“What I’m seeing right now from Mike Leach is an unwillingness to adjust his protection and unwillingness to do what he needs to do to best put his offense in position to take advantage of where they might potentially be outmatched.”

The good news is that Vanderbilt does not post much of a threat of overmatching anyone in the SEC outside of the academic arena.

LSU has won five straight in this series, but a Rebels program that suddenly finds itself ranked No. 12 in the nation would seem to be in good position to break that streak in Oxford.

The Bayou Bengals are a tough group to figure after pulling off a 49-42 upset over a talented Florida team last Saturday after their head coach, Ed Orgeron, had agreed to leave his post after the season.

This has the look of a game where anything could happen, but because it’s not in Tiger Stadium, that uncertainty leans Ole Miss’ way.

A 4-0 start has given way to a three-game losing streak for Coach Sam Pittman and the Hogs, who knew their tough schedule could catch up to them.

The Razorbacks figure to fatten up on the 1-5 Golden Lions in a game that will be played in Little Rock. 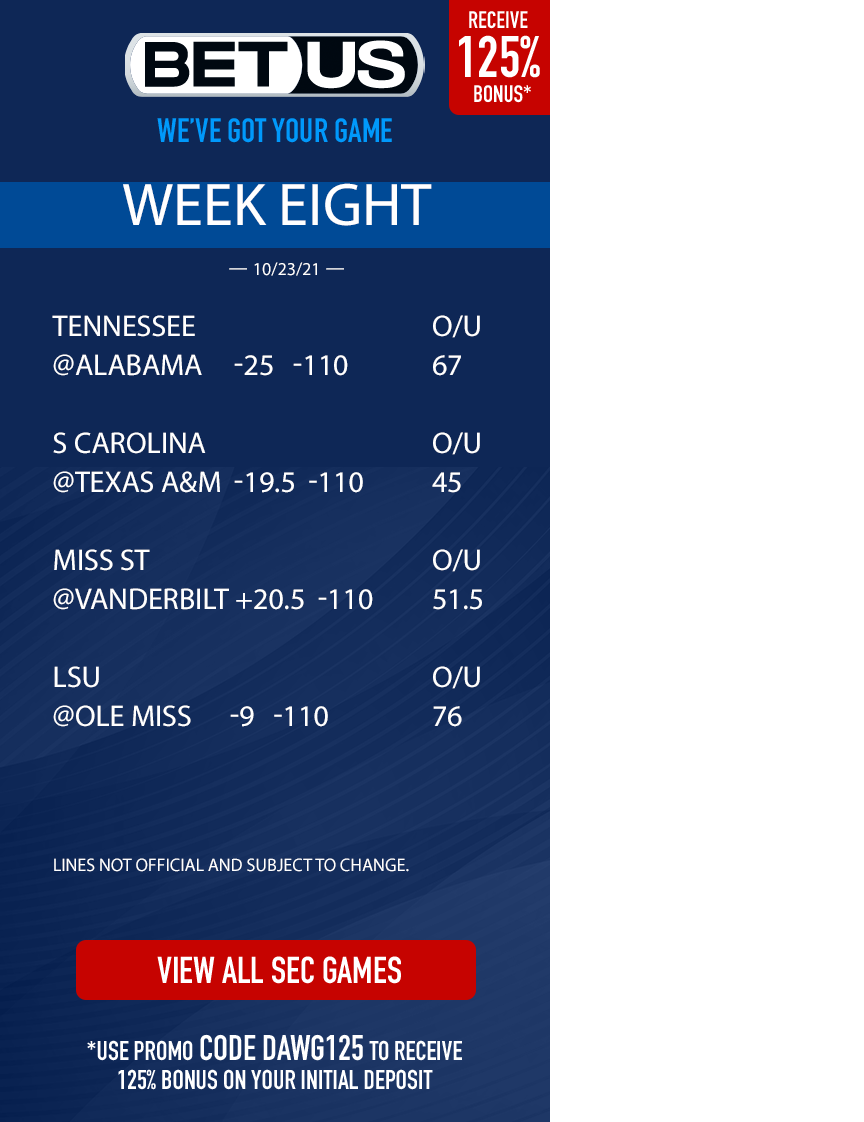